Food, shelter and clothing are the top 3 basic necessities of life. In fact, food is more than a commodity to be bought and sold. We can’t live without food and it plays a significant role in our culture and daily lives. When you combine retail and foodservice together, Canadians spent close to $200B dollars on food and beverages in 2018. We spend on average $200 a month per person on food bought in stores.[i] This brings to light a recent study conducted by Abacus Data (commissioned by FCPC) that revealed rising food prices worry nearly nine in ten Canadians.

[i] How Much of Your Budget Should You Spend on Groceries, www.globalnews.com, May 2017

The survey also revealed that 70% of Canadians think food prices will continue to rise if the next government does not strengthen Canada’s food industry. Food and Consumer Products of Canada (FCPC) submits Canada’s food industry lost 12 jobs per day, every day between 2013 and 2018 due to grocery store consolidation and a challenging regulatory environment decrease choice, raised prices, and inhibit innovation.[i] That translates into over 25,000 lost jobs.  This past September, the CEOs of Canada’s top 3 major grocery chains (Loblaw, Sobeys, Metro) doubled down on their expectation that food prices will soon rise at their stores. They cited increased fuel and transportation costs, minimum wage increase and an ongoing trade war with the U.S which recently ended. https://globalnews.ca/news/4463283/food-prices-increasing-grocery-chains-warn/.

In 2019, the price of food is forecasted to increase by up to 3.5% based on an annual study of food prices predicts.[ii] For the average Canadian family, their food bill is estimated to increase by $411 to $12,157 for the year.[iii] Chart 1 provides a food price forecast by category for 2019.[iv] 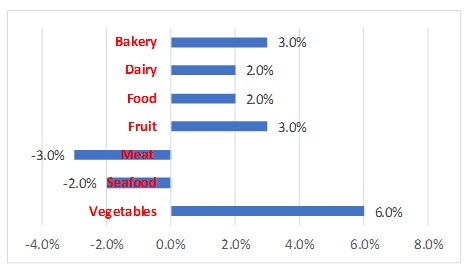 The carbon tax is now a reality for Canadians having commenced April 2019. One report published in 2012 suggested that the effect of a $50 per tonne carbon tax (2022) on food prices would be 3%.[i] The Canadian Government recently announced a ban on single plastics by 2021. What products will be impacted and the effect on food prices is unknown at this time. We must also consider the declining value of the Canadian dollar. Most shelf stable, frozen foods and beverages we consume are imported from the US. December 2014, the exchange rate was $1USD is the equivalent of $1.163 Canadian dollars. Fast forward to January 2019, $1USD equates to $1.34 Canadian dollars. Over this 4-year period, this translates into a 15.2% increase in the devaluation of the Canadian dollar.[ii] Finally, Canada’s food and beverage companies face some 140,000 regulations at the federal level alone.[iii] These costs add up and are ultimately passed on to the consumer. “FCPC reported in April that food companies are struggling in the face of overly-burdensome regulations and policies that foster decreased competition in grocery retailing”. Mr. Michael Graydon, CEO, Food and Consumer Products of Canada.

Rising food prices are a concern for most Canadians, particularly for middle and lower classes. Here are a few ideas on how families may reduce their yearly food bill:

The election of the new Liberal government was thought to open up possibilities around a new food policy. Prime Minister Trudeau tasked Minister of Agriculture and Agri-Food Lawrence MacAulay with developing such a policy that promotes healthy living and safe food by putting more healthy, high-quality food, produced by Canadian ranchers and farmers, on the tables of families across the country. The Federal Governments plan was recently critiqued by Dr. Sylvain Charlebois – Dean of the Faculty of Management at Dalhousie University in Halifax. Titled “Canada’s first food policy: Pointless and underwhelming”, he noted:

Though rising Canadian food prices are a concern, Dr. Sylvain Charlebois reminds us:

“But food in Canada is generally quite affordable compared to other countries around the world. Relative to the cost of living, Canadians have access to one of the cheapest food baskets in the world”.[xi]

[i] How Much of Your Budget Should You Spend on Groceries, www.globalnews.com, May 2017

[viii] How a Family of Four Could Save $3K in Groceries Every Year, www.globalnews.ca, May 2018